One Monthly Goal for February Completed

When Kat from Cat and Kat Quilts announced her annual String Fling back in December, I had no idea I would become obsessed with making string blocks.  I completed 65 blocks, the pile is shown below, with an additional 35 blocks made into a string quilt top.    The quilt top was my February goal for Elm Street Quilts: One Monthly Goal program.

I finished the top last night and took a picture.  This morning, I packed two large USPS Priority boxes.  The first box contained:  65 string blocks made by me, 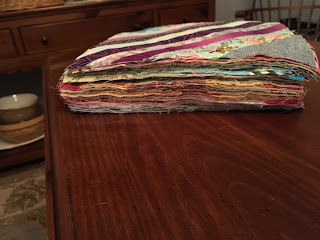 including an additional fifteen I made last week, 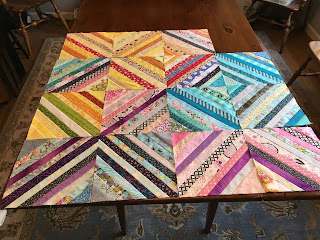 thirteen made by Carol Ann, Melinda, and Susan from the quilting group I belong to, 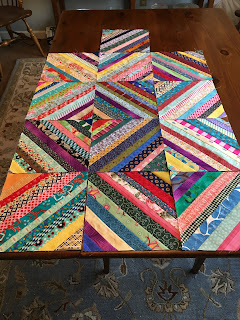 and fifty three blocks, I did not get to photograph, made by Debbie, also from the quilting group.  Lest you thing the rest of our group is composed of slackers, Debbie had already made the blocks and was looking for a good home for them.

The second box contained:  two tops made from the Film At Five pattern at Wedding Dress Blue, 2 pieces of yardage that are suitable for backing fabric, and my String Style top.

The Film At Five tops were made in 2014 and would never have reached the top of the quilting pile.  Hopefully, Kat can use them to comfort a bereaving family. 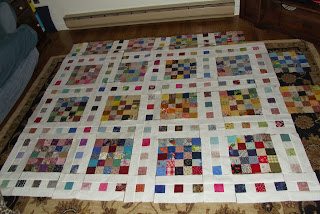 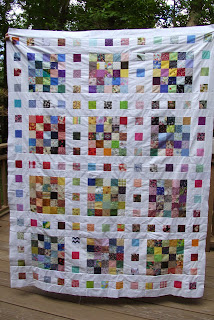 I only got to mail one of the boxes today.  I planned to stop at the post office after I finished my shopping.  While I was in COSTCO, I took a picture of some cute outfits to send to my daughter-in-law for her approval.  While checking the pictures, I noticed the photo I took last night of the string quilt.  I used tone on tone fabric for the corner pieces that would form the centers when all of the blocks were assembled.  Two of the blocks had print fabric that I thought I replaced last night.  I remembered cutting the fabric, but I obviously never sewed it into the blocks. 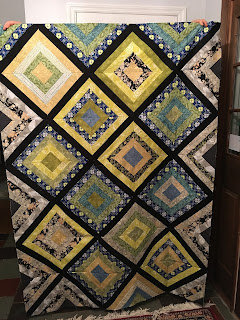 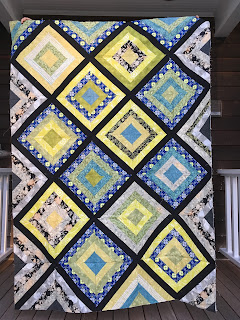 The first picture contains the block that had to be fixed.  It is in the top row, third block on the right.  The corners were replaced on two blocks to correct it.  I don't know if anyone else would have noticed it, but once I saw it, it made me crazy.  I mailed the first box, came home, ripped open the second box, and fixed the error. 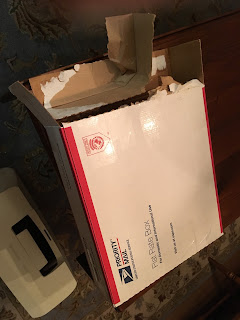 The new box will go to the post office in the morning.  I don't think of myself as a perfectionist, but after all of the work the top took, I couldn't let it go like that.  What would you have done?

I'm linking up to the  February Finishes at Elm Street Quilter for One Monthly Goal and Oh Scrap! at Quilting Is More Fun Than Housework.