Making Up For Lost Time

I was really excited about my daughter coming home for President's Weekend, but the time went very fast and we didn't get to spend much of it together.  Plans were changed on that Saturday morning when my future daughter in law called and asked if I would go to David's Bridal Shop and give my opinion on the gown she chose.  No one from her family was able to go with her so I tagged along.  I'm sure the day was difficult for her.  Most women would prefer to have their mother or a close female relative, but she made the best of it and it turned out to be a lovely experience. 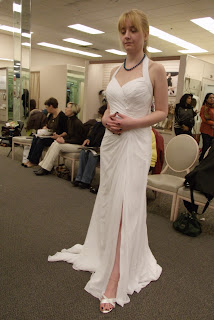 The dress is a size 6 and fits perfectly so the only alterations she will need will be to add a loop to pull up the train. 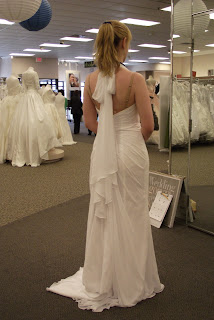 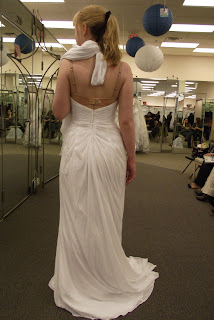 This shows the back detail without the halter tie hanging down. 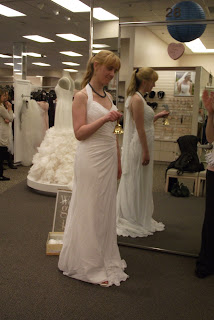 After the bride chooses her dress, she rings a bell so everyone can see her.  Some of the women were very excited about it.  Our bride was not.  The frothy thing on the mannequin to the left is one of the gowns Kim Kardashian wore during her wedding festivities.  It looks like a float made of toilet paper that high school kids would make for home coming.  The bridal consultant told us that almost every bride that comes in tries it on.  We passed on the opportunity.

I pulled out my purple scraps and continued to make blocks for the  Rainbow Scrap Challenge 2013 and linked up over at So Scrappy.  Unfortunately, the colors look a bit off and are showing up as blue.  They really are a dark purple.  I'm using leftover strips of white on white (at least 3 different kinds) and strips and charm squares of purple. 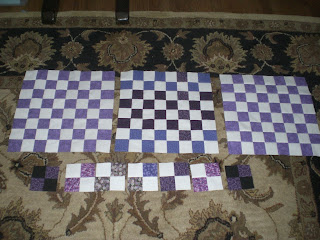 I continued to use my crumb squares to make more Saw Tooth Star blocks.  I have been using pieces of tone on tone and solid fabrics from my stash to make the star points.  This will be an ongoing project for me.  I don't plan on sewing them into tops until later in the year. 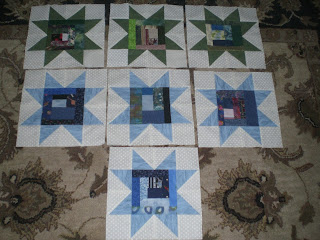 I finished sewing all of the blocks for the Wiggly Whimsy Sew Along over at Terry's Treasures.  Now that my blocks are sewn, I can slow down and sew the rows together a bit at a time.  I did not use Rebecca Silbaugh's method from her recipe over at the Moda Bake Shop.  She uses a white jelly roll for the background and a charm pack cut into 2.5 inch charms.  I cut yardage into 5 inch squares and matched each with a charm and after sewing on 2 sides I cut them in quarters which gave me 4 blocks with 1 charm square and 1 background square. I sewed some of the 2 piece combos on one side and cut it in quarters resulting in 2 two patch blocks., 2 unsewn background squares and 2 unsewn charm squares that I could attach to the sewn 2 patch blocks to make a 3 patch block.  The original quilt finishes at 56.5 square.  I like rectangles so I added one and a half extra blocks. You might notice that the bottom row has one block in the wrong position.  When I sew them, it will be corrected. 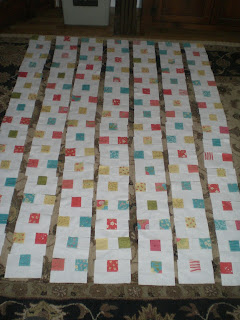 I am determined to finish my chosen UFO this month.  Time is running out, but hopefully I will get it done by midnight Thursday.
Posted by KatieQ at 1:03 PM 8 comments: