Today I finished my 9 patch blocks for  Illene's quilt at Bluebird Quilts blog.  Although the colors are soft, the picture unfortunately looks washed out.  They will be posted to Australia in the morning.  Hopefully, they will be a good addition to the quilt. 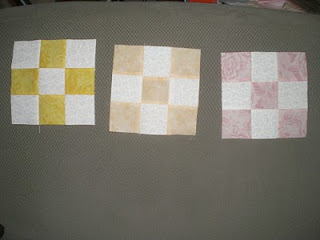 My husband's Uncle Frank was born on February 29th.  When my children were little, they loved to tell their friends how their uncle only had a birthday once every four years.  Although, this isn't leap year, it is Uncle Frank's 70th birthday.  We decided to celebrate in a special way.  One of the local restaurants is presenting special celebrations for Chinese New Year.  On Sunday, we took several members of my husband's family along with Uncle Frank and his wife (my late mother-in-law's sister) Aunt Mary to the restaurant for dinner and birthday cake.  While there, we viewed a Kung Fu demonstration and two dancing Chinese dragons.  The loud drum and cymbals that accompanied the Dragon Dance kept conversation to a minimum, but it was great fun.  Before dinner, traditional New Year's red envelopes were distributed.  We we instructed to put "something green" in the envelope and put it in the dragon's mouth if we wanted good luck in the New Year.  It was difficult to get a good picture because of the lighting and the constant movement of the dragon.  My son took a not so flattering picture of me feeding the dragon. 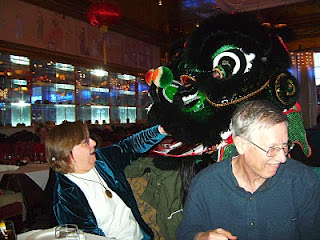 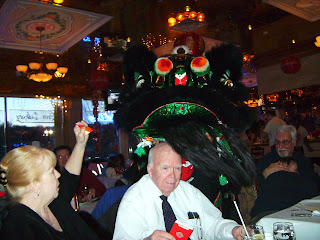 While we didn't manage to get a picture of Uncle Frank and the dragon.  Uncle Tom managed to survive his dragon encounter.  While Aunt Eileen tried hard to get the dragon's attention.

Spending time with our family left me with a very Happy feeling on Monday.
Posted by KatieQ at 6:30 AM 1 comment: