I Get By With A Little Help From My Friends

I belong to an online charity quilting group called the Sunshine Quilters.  They are currently running several Round Robin groups.  This is the first time I am participating in a Round Robin where you add a different border to each block you work on. I really want to make my row in the Round Robin to enhance the block I have already received.  This is where you come in.

This is the 17.5 inch center block sent to me by Kathy from Tampa. 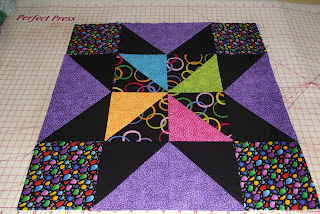 I decided to add one solid border to make the block 20.5 inches square.  I also wanted to use half square triangles in the border.  I have the blocks made, but I can't make up my mind if I want to echo the purple and black star point or to go in a different direction.  This is a bold step for me.


After sewing a row and a half of the blocks in this direction, I decided I should explore another opinion. 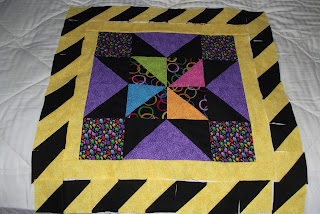 This would be the other choice.  I can't show the complete border because some of the HST are already sewn in the direction above.  It wouldn't be a problem to take them apart. 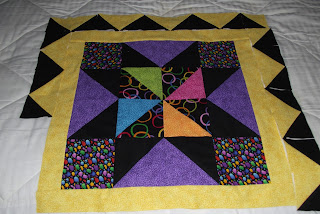 Hopefully, you will share your opinion.  After me, there will be 2 more participants to add rows.

I also made 2 more Tetris blocks from last week's shapes.  I plan to sew this week's block later today. 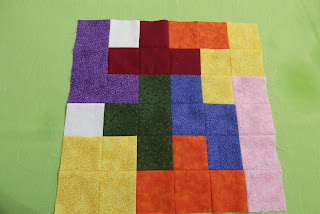 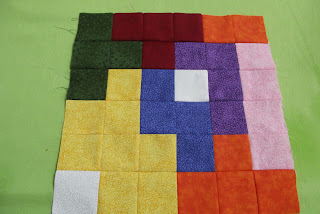 After seeing all 4 blocks together, I decided I will not be using sashing between the blocks.  I also feel kind of dumb realizing in all 4 blocks I put the orange shape in the bottom row.  I don't know how I didn't notice it before, but when the blocks are all sewn together it won't be a problem. 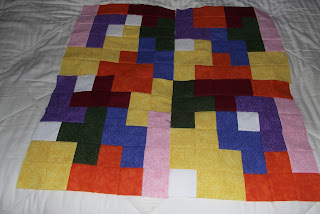